I have been meaning to create some of these little beauties for a while now. I have grouped 2 Shapes, a Toggle Button and a Cylinder to make a nifty Toggle Button that can be copied into a Worksheet. After that, you can then add/link the small VBA Code Subroutine to do the toggling work and to store or update the On/Off values. These Buttons are my own design and Code. I took the Colours for the Demo from an image I found by searching on Google. Then I added a nice little easing function for the smooth animation. The easing function is a Robert Penner easing function called 'easeInQuad'...

ToggleButtons.xlsm is ready to use (version specific naming of the file will differ with each new release). Open theToggleButtons.xlsm File and test out the Demo Buttons. The Demo Sheet doesn't really need that much of an explanation. There are two Toggle Buttons that capture their respective 'toggled' values


Using the Toggle Buttons in your own Project
To use the Toggle Buttons in your own Project, first Unprotect the Interface by just doing Unprotect Sheet on the Protect Group of the Review Tab on the Ribbon. Right-click a Shape and use the Selection Pane on the Editing Group of the Home Tab of the Ribbon to make Selections easier. Now, Copy the Shape (it's Grouped) and Paste onto any Worksheet. If you need more than one set of Toggle Buttons then repeatedly Paste more until you have the amount that you need. Now rename the Toggle Button Shapes and individual Shapes using the suffix 2, 3, 4 etc. The Code uses the Application.Caller() method to retrive the Toggle Button Name and with this, it can then find the Cylinder and the Group Name - it is still wise to make all of the Shapes have unique Names as this is good practice, but the Code means that no Names need to be hard-coded. Remember to use the Selection Pane to do this as it's easier and you can see what you are changing. Now Copy the Code in the Sheet1 Code Module into your own Project Worksheet Code Module. That's it, click one of the Toggle Buttons to protect the Interface. The Code below details haow the Toggle Button and Cylinder are known via Application.Caller():


Changing the Alt. Text of the ToggleButton
I have done the hard work for you already, however if you have an error when creating a new Toggle Button if you use your own Shapes then remember to edit the Alt. Text as per the image below (set to True or False for the Code to work correctly when using my Subroutine and easing function): 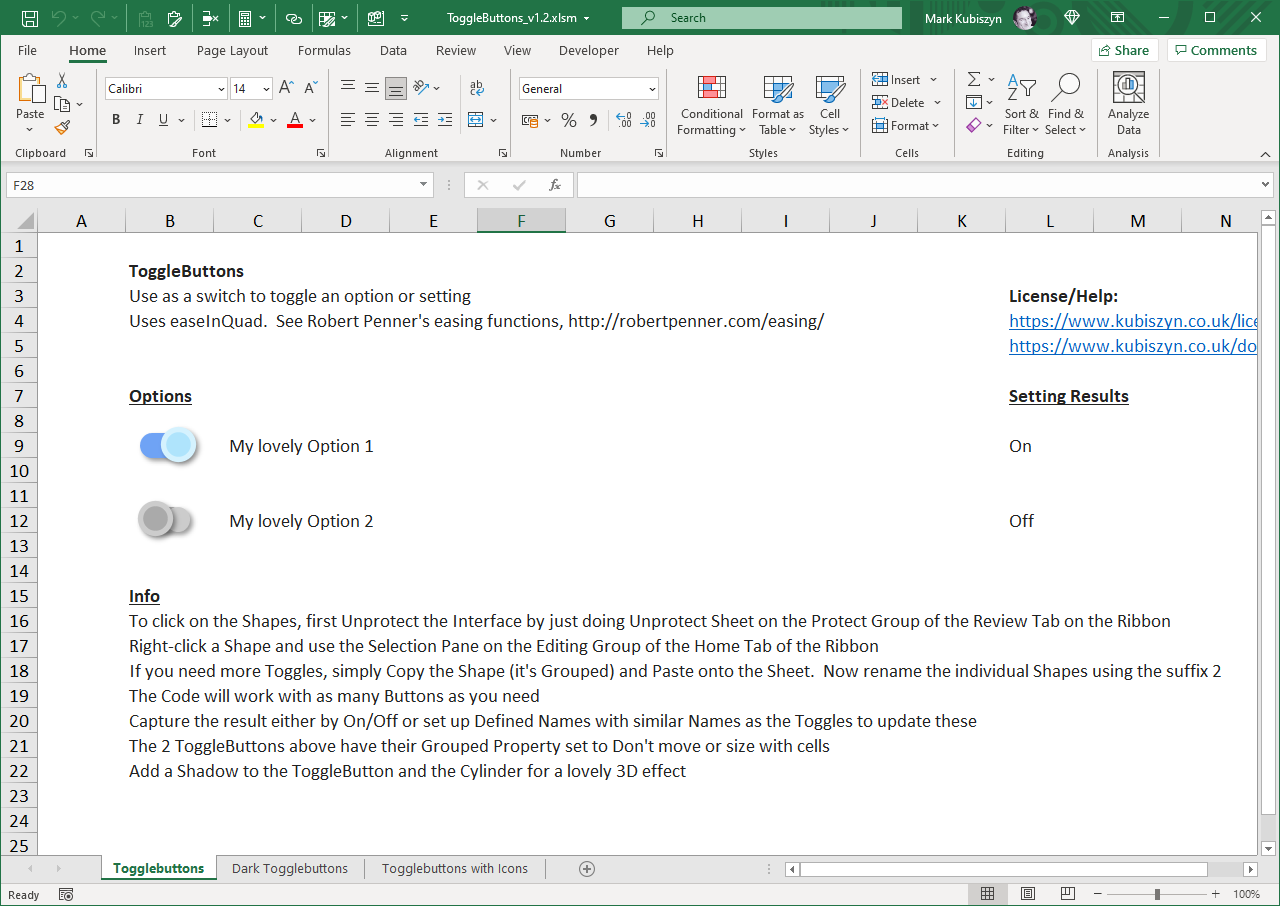 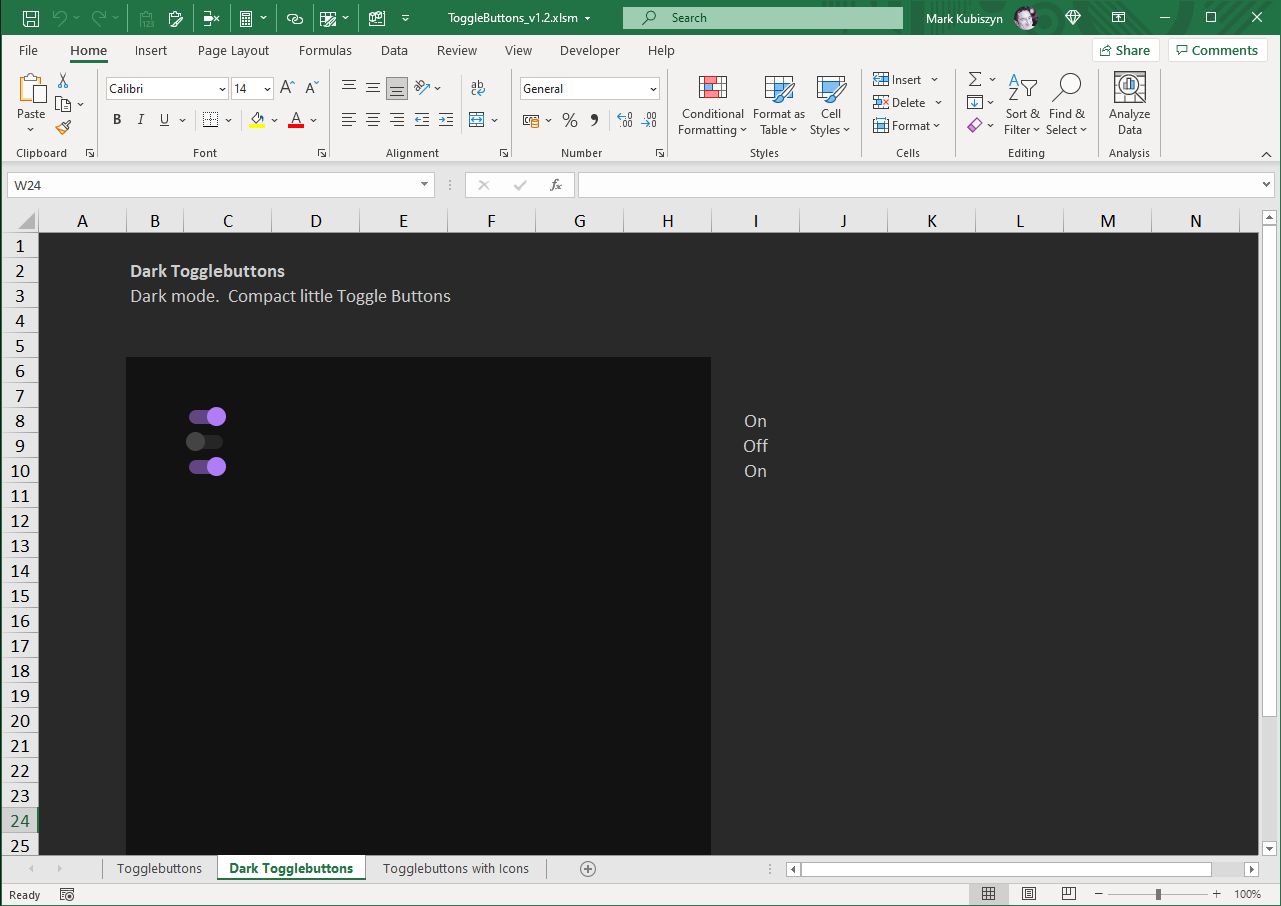 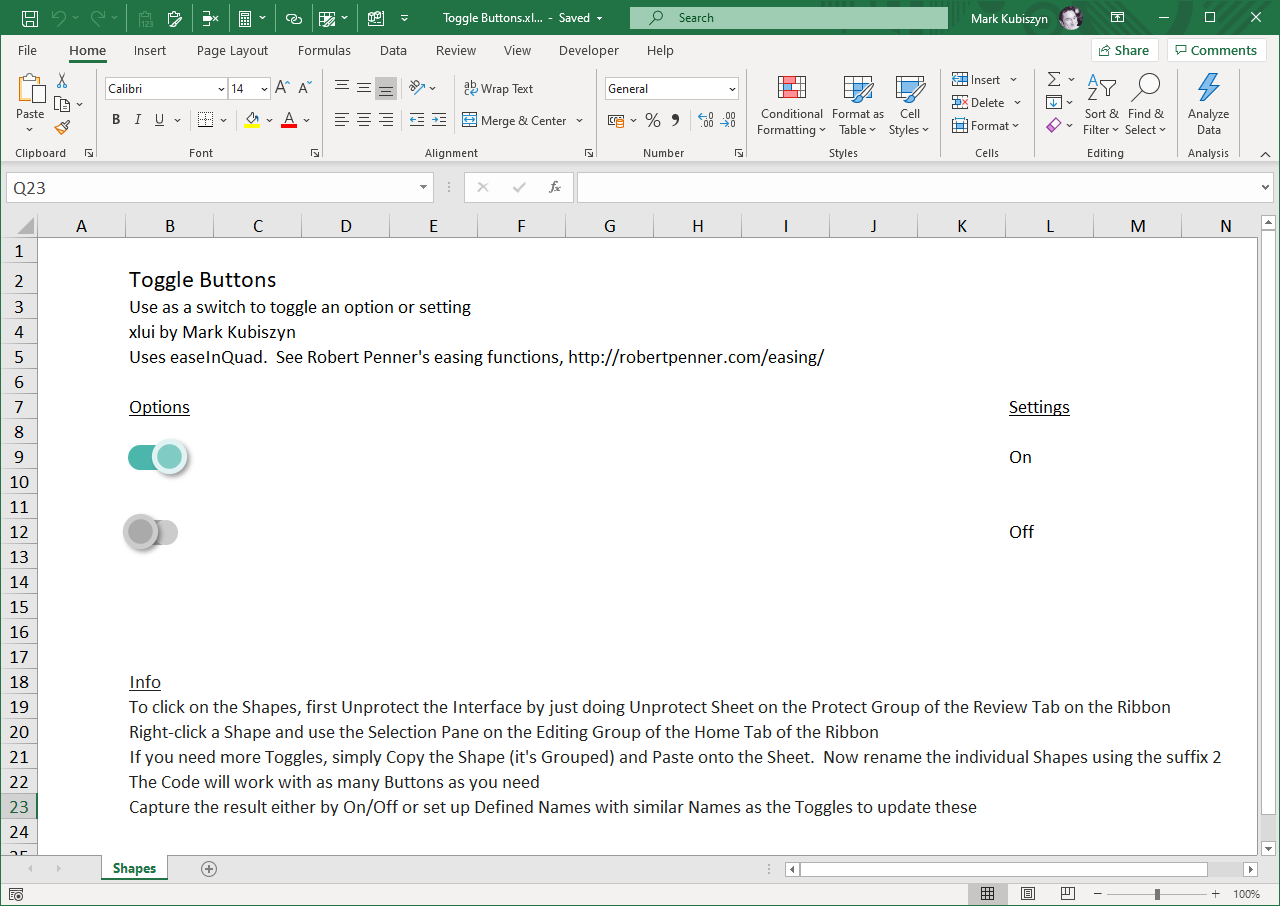 There are no Q & A for the Toggle Buttons

This is a video of the Toggle Buttons Demo

Please remember you have purchased very affordable Software and you have not paid for a full-time Software design agency - I am but one man. Occasionally I may help with small tweaks, but these requests will be put on a much lower priority due to their nature. You have not PAID for Support, Support is 100% optional and I provide it for your convenience, so please be patient, polite and respectful

Support (limited) for my Software includes

Software support does not include

How to get Support

Contact Mark Kubiszyn on the Email address provided when you purchased the Software, including the Order Number
...or Contact Mark Kubiszyn via our Facebook Page - remember to be patient, if there has been an issue with your download, Mark will always respond within 48 hours and will Email you the File directly if neccessary or via Messenger. For other issues the response time may be considerably longer and I may choose to respond to specific questions only (as is my right), depending on what has been asked

* There are currently no bugs identified


Added a Dark Mode with some compact Toggle Buttons


General release of the first version of Toggle Buttons